Wild Cam: Where are fishers found in New York State?

Fishers haven’t always been prevalent in the central and western parts of New York State. In fact, in the late 1800s and early 1900s, populations declined rapidly due to unregulated trapping and forest fragmentation.

But since then, fisher numbers have increased, due in part to a trapping closure from 1937 to 1949 and the reversion of agricultural fields back into forest lands. In fact, there’s now a harvest season for the valued furbearer in the northern part of the state, and around 2,500 fishers are harvested there each year. Researchers wanted to look into whether there should be a harvest season in the central and western parts of the state as well.

As part of that effort, researchers with Cornell University’s Department of Natural Resources and the New York State Department of Environmental Conservation examined fisher occupancy in areas already open to fisher harvests as well as closed areas to determine whether the latter could possibly support a trapping season. While harvest data are typically used to determine the abundance of species in an area, these particular areas were lacking those data, says TWS member Angela Fuller, who heads the USGS New York Cooperative Fish and Wildlife Research Unit that’s part of the University’s Department of Natural Resources. As a result, the team used camera traps to better understand fisher occupancy at these sites. “The occupancy modeling method is really useful for state wildlife management agencies over large areas at relatively low costs,” Fuller said.

Their findings were recently published in the Journal of Wildlife Management and are highlighted here as part of The Wildlife Society’s most recent Wild Cam photo essay. 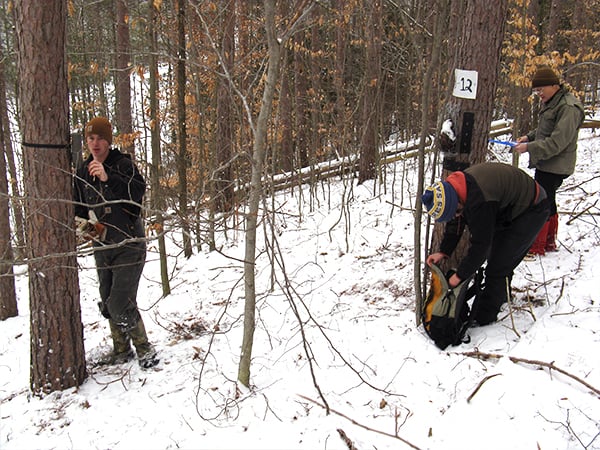 Researchers with the New York Department of Environmental Conservation placed camera traps in five wildlife management units that were open to trapping as well as a total of eight areas that have been closed to trapping for about 65 years. The team placed beaver meat on the camera traps to attract fishers but, in the process, captured photos of several other species that were also drawn to the bait. A fisher licks its lips after getting a taste of the beaver bait. Biologists with the New York Department of Environmental Conservation also placed gun brushes on the trees to collect fisher hair, which not only provided genetic information about the species but also helped identify individuals. Researchers pointed the camera toward the beaver meat and were able to catch a wide range of species such as the coyote captured here. Here, a raven attacks the beaver meat bait set out for the fishers. Other species “weaseled” their way into the camera trap photos as well. Biologists checking on the camera traps often came across weasels exploring the bait stations. Larger species such as this deer also got close to the camera. In the future, Fuller hopes to use these photos to create multispecies occupancy models for this particular area in New York State. After examining the fisher photos, researchers compared the occupancy in the closed harvest areas to those in the areas open to harvest. Based on that information, they identified areas that would benefit from trapping and those that should remain closed.

In addition, as part of the New York Department of Environmental Conservation’s fisher management plan, the research team recommended a six-day trapping season for the species in areas that reached the occupancy threshold. “We determined that a conservative season was suitable,” said Michael Schiavone, a small game unit leader in the bureau of wildlife at the New York Department of Environmental Conservation, who also worked on the study.

Fisher numbers vary in different parts of New York, according to Schiavone. For example, while fisher populations are increasing in the central and western parts of New York State, they’re declining in the northern part of the state, causing managers to lower the harvest season in that area from 46 to 30 days. Meanwhile, in Pennsylvania, managers recently opened up a harvest season for the species.

Through their research, the team also found greater fisher occupancy in areas with low road density and a high amount of conifer and mixed wood forest.

This effort to determine fisher occupancy in the region “was an important question that needed to be answered,” Schiavone said. “It was a good partnership and a good example of when people in academics help state agencies in decision making.”

This photo essay is part of an ongoing series from The Wildlife Society featuring photos and video images of wildlife taken with camera traps and other equipment. Check out the other entries in the series here. If you’re working on an interesting camera trap research project and have photos you’d like to share, email Dana at dkobilinsky@wildlife.org.