COVID-19 has affected everyone, and wildlifers are no exception. In this series, TWS is looking at challenges facing the profession due to the pandemic.

Wildlife researchers and technicians are taking extra precautions to protect highly endangered black-footed ferrets in breeding programs, because they are likely susceptible to the virus that causes COVID-19.

“I would call it an overabundance of caution,” said Andrea Drost, manager of wildlife care at the Toronto Zoo facility that breeds a number of black-footed ferret (Mustela nigripes) in collaboration with partners at the U.S. Fish and Wildlife Service’s National Black-footed Ferret Conservation Center in Colorado and four other zoos in North America.

Researchers conducted a study published in April to see what domestic animals were more susceptible to contracting the coronavirus SARS-CoV-2 that causes COVID-19 in humans. They deliberately exposed a handful of animals to the virus and found that cats (Felis catus) and domestic ferrets (Mustela putorius furo) were particularly susceptible.

While no black-footed ferrets are known to have contracted it, the species is closely related to the ferrets tested in the research. So like researchers who work with bats, which could potentially carry the virus, ferret biologist are taking steps to reduce the chances of spreading infection to the animals they work with. 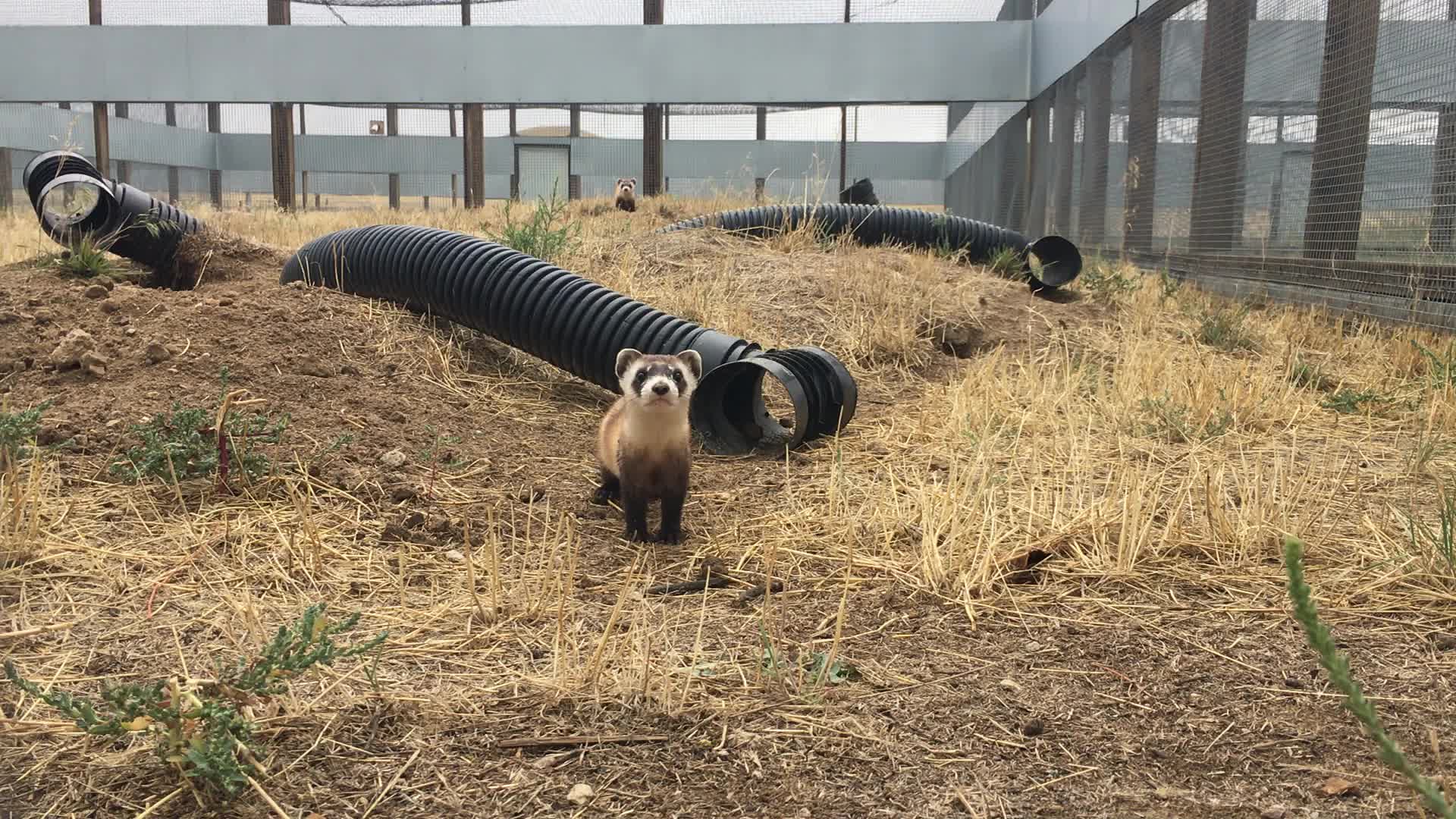 At the Colorado facility, biologists monitor ferrets for signs of sickness and have created a sick bay — a type of quarantine zone — in case an animal displays symptoms. To put more distance between the animals, technicians are reducing the number of ferrets in specific building spaces, using more cages and placing empty cages between ones that are occupied.

“We’ve got more baskets with fewer ferrets in them. If it goes south, we’re hoping to reduce our losses,” said Pete Gober, the U.S. Fish and Wildlife Service recovery coordinator and director of the ferret center in Colorado, who has worked with these ferrets for 25 years. The center houses approximately two-thirds of 300 ferrets held in captivity and also coordinates reintroduction efforts of individuals bred in the Colorado facility and other locations around North America.

Managers have put plastic sheets between the cages to limit the passage of droplets from human workers and between ferrets. The center has also reduced staff exposure to the animals and increased disinfectant protocols and Personal Protective Equipment use.

Gerri Mintha, a zookeeper at the Toronto Zoo, said employees there are monitored for COVID-19 before every shift. Staff members working with black-footed ferrets are divided into two teams that never overlap, so if someone contracts the disease, only the staff they work with directly will have to quarantine.

“We’re calling them the ‘isolation rotations’ because those two groups never cross over,” said Drost. Staff throughout the Zoo also maintain two meters of distance whenever possible, or alternatively to wear masks and other personal protective equipment if working within that two-meter distance. Staff throughout the Zoo also have staggered start times to further reduce contact between staff.

Once believed to be extinct, black-footed ferrets in the wild are already vulnerable in part due to other diseases. Canine distemper killed the first six animals taken into captivity in the early days of captive breeding. The sylvatic plague, contracted from black-tailed prairie dogs (Cynomys ludovicianus), which the ferrets prey on, has affected recovery efforts throughout the ferret’s range, nearly wiping out the ferret population in Montana’s UL Bend National Wildlife Refuge in the winter of 2017-2018.

“The distemper incident was a nasty airborne contagion precedent from the past,” Gober said. “Additionally, ferret recovery in the wild remains tenuous mostly because of sylvatic plague.”

While these diseases present challenges in the wild, in some sense they set a good precedent for the types of decontamination and precautions necessary during the COVID-19 pandemic.

“We’ve always had disease prevention protocols in place at all these places, but we’ve heightened these,” Gober said.

The Toronto Zoo also has long had protocols that are useful in this situation, Mintha said. Since ferrets are also susceptible to influenza, staff who exhibit flu symptoms aren’t allowed to work with the animals. Knowing that the ferrets she works with could be vulnerable to the novel coronavirus, she said, she takes extra precautions when she’s not at work to limit her exposure.

“I can’t imagine how bad I would feel if I unknowingly brought it into the population,” she said. “I even limit, when I’m home, the amount of exposure I have to other people, because I’m just so paranoid about bringing this in.”

The Toronto Zoo normally sends a batch of new ferret kits to the center in Colorado every year. But given the possible risk, Mintha is still unsure whether that will happen this year.

USFWS biologists in Colorado still plan to reintroduce 100 to 200 animals in the fall, as they do every year to bolster the struggling wild population, Gober said, but that could change. So could annual fall surveys on wild ferret populations. This is normally done in teams, but physical distancing may require changes to their processes.

“The new normal is working harder and getting less done,” Gober said.